The Jigsaw is a tool which deserves a place in everyone’s tool collection. They are great at creating smooth cuts in wood, they’re very versatile, and relatively easy to get started with. But not all models are created equal. Some are high quality and great to use, while other cheaper models are prone to excessive vibration and are uncomfortable to use. Paying more for a jigsaw doesn’t ensure that you will get a good one, to get the best jigsaw for the money you need to understand a variety of factors about what makes a jigsaw good.

You need to consider whether you want one which has variable speeds available by using the trigger, or do you prefer one which uses a dial, or perhaps even both. You also should think about how ergonomic it is to hold onto, as if it is lacking in comfort you won’t enjoy using it and it will be a hassle. All in all, getting a good jigsaw might sound easy, but there’s plenty that goes into the equation. So before you make a purchase, check out our jigsaw reviews and buyer’s guide below.

Below we are going to have a look at the 5 best jigsaws according to our research. The models we have listed here tick the boxes in what we think makes a jigsaw good. These reviews are aimed at supplying you with the facts and knowledge that is required to make a wise buying decision. 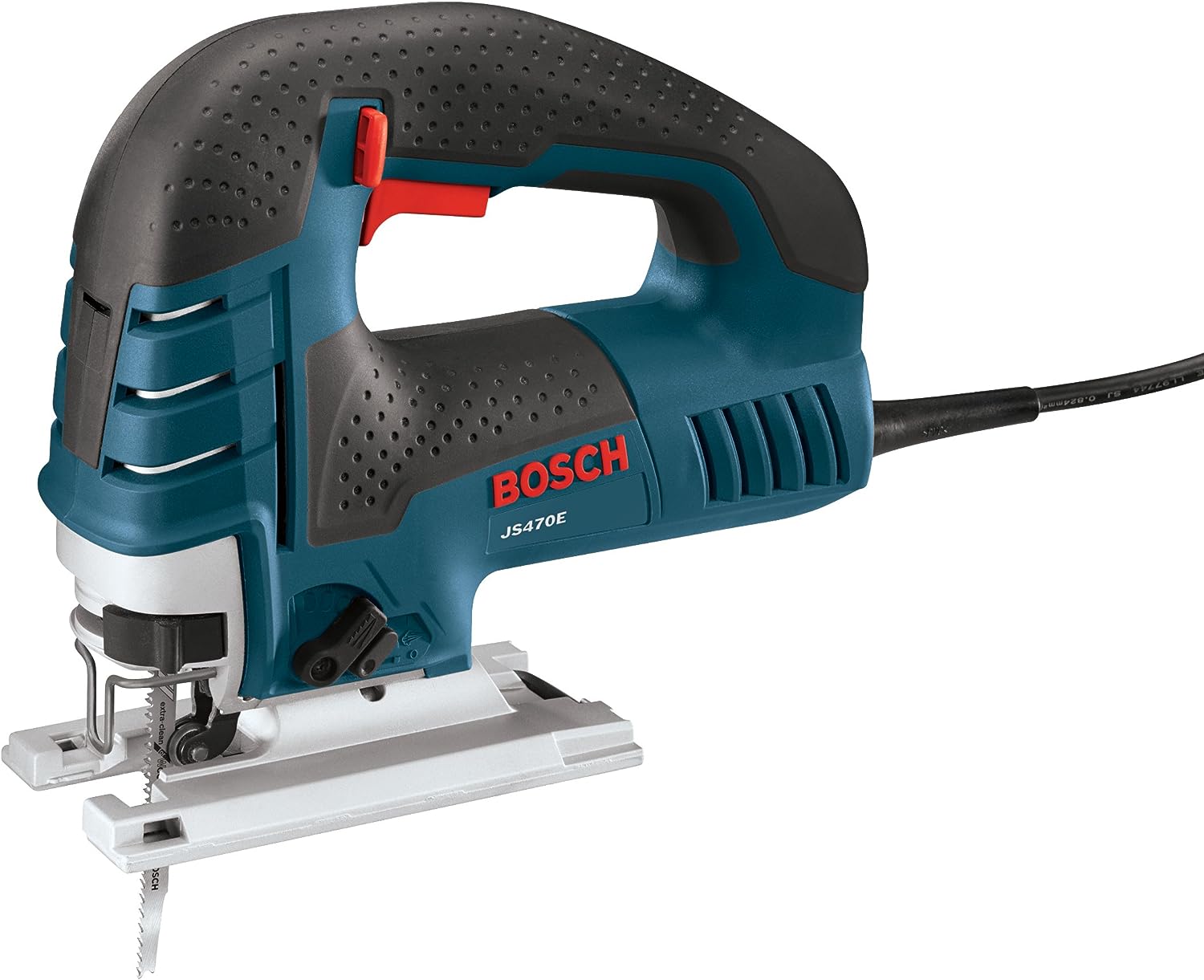 Bosch is well known to produce high quality power tools, in fact in all likelihood if you’ve ever stepped foot inside of a workshop or garage you will have seen some Bosch equipment. The Bosch JS470E is very smooth to operate. It doesn’t bind and jump around, it just cuts straight and accurately. It features a low vibration design which is meant to reduce vibrations while operating the jigsaw and it certainly does work well. Due to the low vibration design this jigsaw is not too hard to hold onto.

You have a variable speed dial on this jigsaw which allows you to set the fastest speed you want the saw to operate at, then the trigger also offers variable speed within the ceiling that you set on the dial. You could also set the trigger at top speed, so it doesn’t vary depending on how far you pull it. This way it will go full speed immediately. The JS470E has a powerful motor which is 7 Amps and capable of 3100 strokes per minute. Hence why this is the best overall corded jigsaw on this list. This Jigsaw is about as ideal as it gets in terms of features. The main drawback that we see is how much it costs. Put simply, this jigsaw just isn’t cheap. 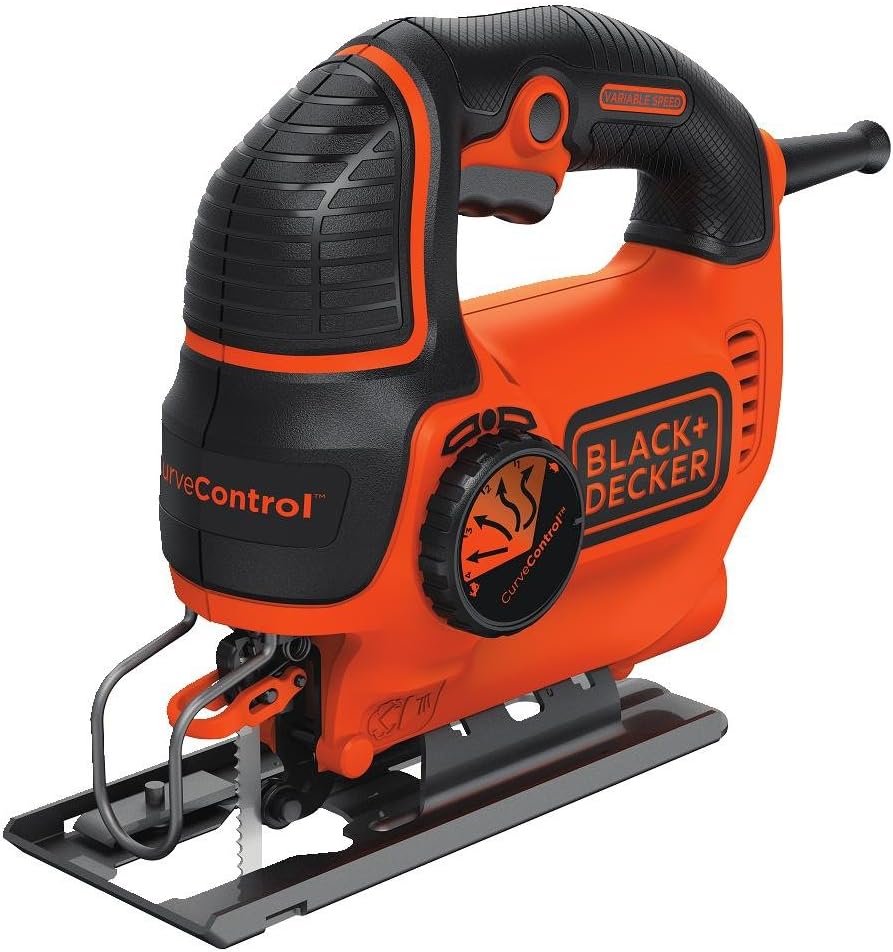 At the other end of the price spectrum compared to the Bosch Jigsaw is the highly affordable Black and Decker Jigsaw. Although this is a cheaper option, it packs some serious bang for the buck. That’s why it is our number one pick for best value. It has a decent 5 amp motor which is ample enough to cut through various materials and can get the saw to speeds of 3000 SPM. It also has a stroke length of 3/4 of an inch, and features a variable speed trigger. It doesn’t however have a dial to lock in the speed.

At a weight of 4.6 lbs this is a very lightweight tool, but despite being light-weight it doesn’t seem to vibrate too much. The handle of this jigsaw seems to be quite effective at reducing the amount of vibration during use. All in all this jigsaw provides all the features you need at a very reasonable price tag. It also comes with a full two year warranty in case anything bad happens to it. 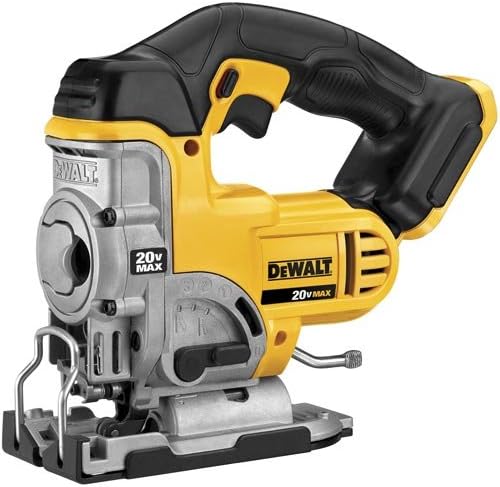 Cordless Jigsaws are more versatile and maneuverable than their corded alternatives. If you prefer working with tools that don’t have power cables then this is the jigsaw for you. This DEWALT jigsaw is able to go to speed of 3000 SPM, which is at least as much as the corded alternatives tend to be able to do. This saw is smooth to use, and makes clean and precise cuts with its 1 inch stroke length.

This cordless jigsaw is 5.4 lbs in weight (without the battery). With the battery added on the weight becomes closer to 7 lbs. So it’s quite a heavy saw when you take the battery into account. This being such a heavy tool could lead to becoming tired while operating it – which is the main downside of this saw. This jigsaw also features a very generous 3 year warranty to give you peace of mind. 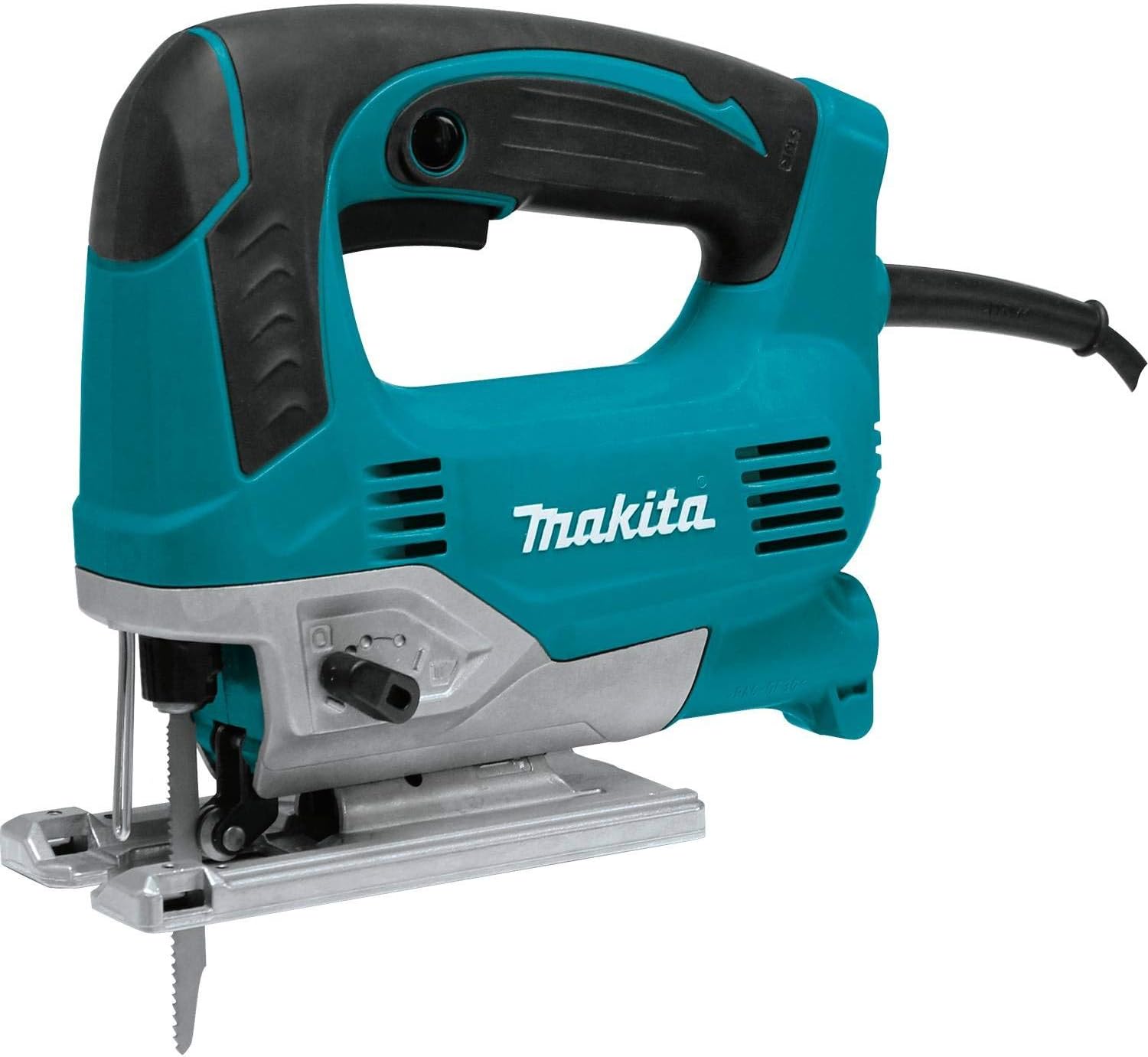 All Makita tools are well known to be high quality, as it is a very trusted and reputable brand. This Jigsaw is no exception and lives up to the Makita name of being high quality. This jigsaw weighs about 5 lbs which is about average for a corded jigsaw (signficantly lighter than a cordless jigsaw). Considering that this jigsaw is relatively lightweight it is also quite powerful, with a 6.5 amp motor capable of speeds up to 3100 SPM with a 3/4 inch stroke length. Despite the high power and low weight this is also a tool that’s relatively resistant to vibrations thanks to its good design. This jigsaw also has a great built in vaccuum which removes dust as you go to give you a clear view of your cuts.

Like any power tool there are some floors and minor imperfections that must be considered in order to provide a balanced point of view about this machine.This jigsaw is variable speed, but unfortunately the trigger isn’t which for some could be a deal breaker. The other main drawback that we see is the fact that the warranty offered is only 1 year, which in comparison to the other tools on this list is quite low. 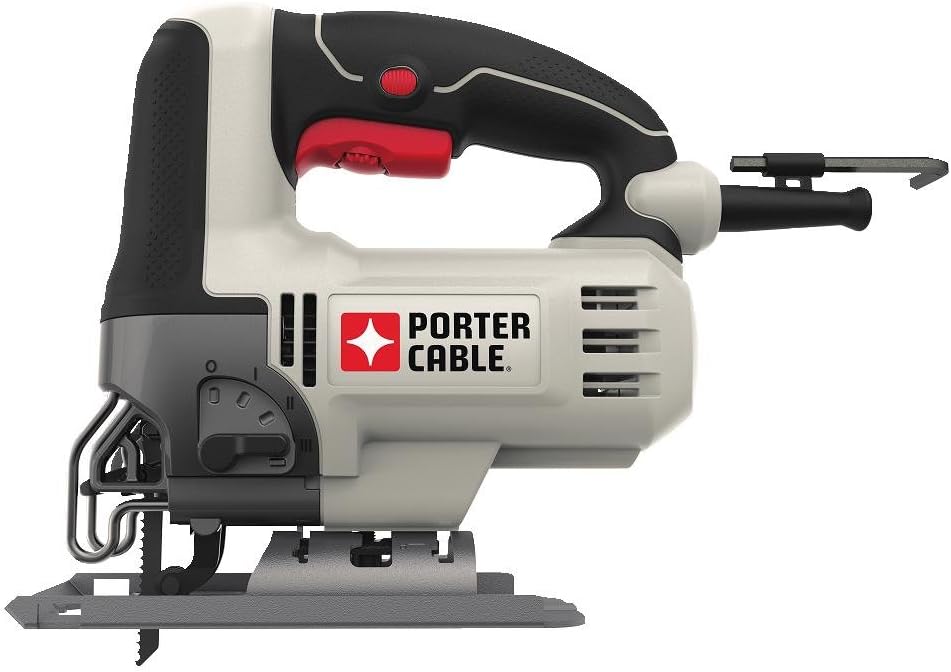 The Porter-Cable jigsaw is on the heavier side weighing about 6 lbs, but it also has a powerful motor that accounts for the added weight. The motor is 6 amps, and produces a speed of up to 3200 SPM with 13/16 inch stroke lengths. As you can see this jigsaw is one of the fastest available on the market – it also has variable speed controls, controlled by both a dial and the trigger.

This jigsaw comes with a three-year warranty which is very impressive considering the price range. Despite all these pros that we have mentioned there are a few minor drawbacks that we have to talk about. The most important issue that some consumers have noted is that the blade is not perfectly square making it difficult to get a perfectly straight cut. But overall this jigsaw is very smooth to operate and this drawback doesn’t take away from that fact. It also doesn’t have a dust port which can make it more difficult to see where you’re cutting.

Consider before buying a Jigsaw

After reading through our top 5 jigsaw reviews you should have a fair idea which one is right for you. But we still need to go over which features make a good jigsaw good. This should make your decision of which one to buy easier and it’ll remove a lot of the guess work. So without wasting anymore time let’s get into it and take a look at the top things to consider. There are many things to keep in mind and you shouldn’t neglect any of them otherwise you might end up with a tool that doesn’t suit your needs.

With a tool that is comfortable and light enough you can easily get into a zone and lose track of time. This is the ideal situation to have because it means that the tool you’re using isn’t getting in the way and holding you back. But if the jigsaw is too heavy the hours spent working can start to get on your nerves and increase the fatigue you will be feeling. That’s why weight is an important consideration when it comes to choosing a good jigsaw. Corded jigsaws tend to be lighters as the power source is not attached to the handle, so if light weight is your primary concern then you’re probably better to opt for a corded jigsaw rather than a cordless model. There are also some advantages to having a heavier jigsaw too – lighter jigsaws tend to cut less smoothly and be a bit more jumpy.

Each saw that we have on this list certainly has ample power, but still, power is something you need to consider. If the task at hand is more demanding then it is ideal to have a jigsaw that has more power. Power is measured in amps and range from about 5 to about 8 with most of the models on our list. It also is something to keep in mind especially if you’re using a cordless jigsaw as they rely on a battery. The battery will get used up much faster if the saw is more powerful.

The speed of a jigsaw is measured in strokes per minute, also known as SPM. The Faster the SPM the smoother and more efficient the saw is able to cut. Ideally you should opt for a jigsaw which has an SPM over 2000. Anything less than this is probably too slow. You should also go for a model which has variable speed control. By having more control over the speed of the blade you can create more precise cuts. All the saws that we have on our top 5 list include variable speed. But they differ in the way that they do it. Some only let you vary the speed using the trigger, while others have a dial that allows you to set an exact speed.

As time goes on battery powered tools are becoming more popular as battery technology increases. Back in the day there was only a small handful of cordless tools that ran on batteries, but these days they’re becoming just as commonplace as the corded version. But as far as popularity goes, battery operated jigsaws are not as popular as other cordless power tools on the market. This is because the job of the jigsaw is very demanding and requires a lot of power for extended periods of time. This strain on the battery means that it might have the tendency to run out quickly. So whether or not you need a corded or a cordless jigsaw comes down to your preference and depends on how long you will be using it for at a time.

In conclusion we believe that the best overall jigsaw is the Bosch JS470E, although it is not cheap. That’s why we also listed the Black+Decker Jig saw – which we think offer the best value for money. It features a light design that ticks all the boxes necessary to make a good jigsaw. After reading through our buying guide and reviews you should be well equipped to make a wise purchasing decision. If you have anything to add feel free to get in touch.