For contractors, especially builders there are some tools which are simply must-haves. The framing hammer is one of these. The best framing hammer is subjective, yet most people who work with them have often settled on one brand for various reasons. If you’re still on the market looking for a good framing hammer then this article is for you. Even if you already have one and you think the one you have is great you may still acquire some knowledge that you can use to ensure your next hammer purchase is a good one.

Back in the day most people considered the heaviest framing hammer to be the best and most powerful, but due to technology advancements that’s not the case anymore. The list of framing hammers that follows consists of options which are all lighter than their predecessors, while also being made with stronger materials.

Below we will look at the 5 best framing hammers that offer good value for money. The purpose of this guide is to help you come to a decision of which one to purchase. Ideally you only want to buy a tool once and then use it for ever, hopefully after reading this guide you will be able to do just that. 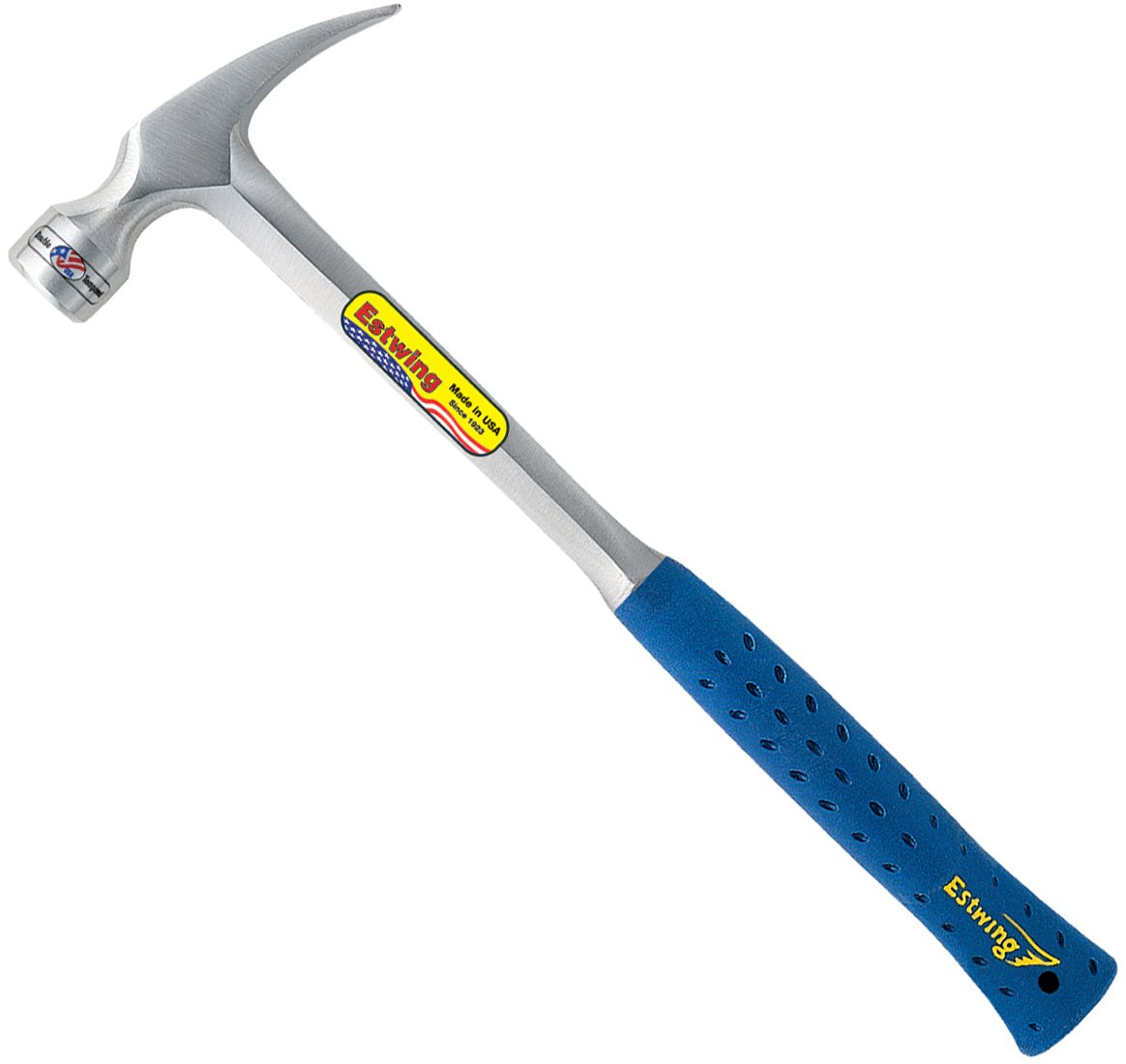 This 22 ounce framing hammer from Estwing is the best option in our opinion based on a number of factors which we will explore below. The Estwing framing hammer features a textured face designed to give you extra grip, and to be perfect for driving in nails. One downside of this is that a missed strike can leave an unsightly mark on the wood. With this hammer you don’t need to be completely precise with your strikes to get a good amount of power to put a nail in. The grip of this framing hammer is also designed specifically to reduce shock from impact which makes this quite comfortable to use.

As far as the construction goes, this hammer is very durable. It is forged steel, and all in one piece so there’s no chance of it breaking apart. Consumers have noted that this hammer is in fact so durable that it lasts for decades. For how cheap this hammer is that is very high praise indeed. As with most tools there are a few minor gripes that some consumers have had about this product. Some people complain that there are sharp edges that haven’t been ground down sufficiently – however this isn’t often the case. 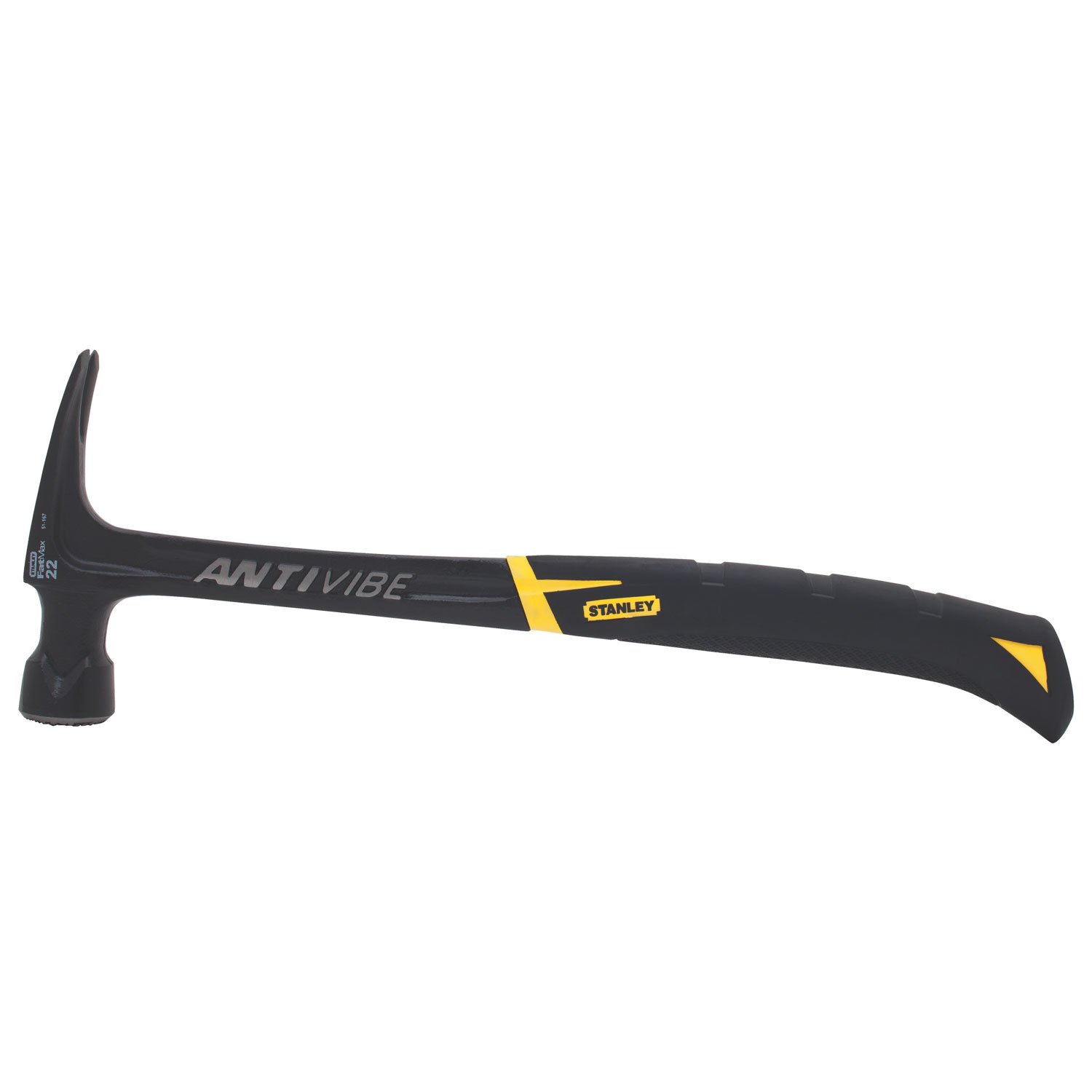 The Stanley 51-167 is the second best framing hammer on this list. Unlike the Estwing this hammer has a smooth face, so if you miss the nail and hit wood you won’t leave as much marks on the surface. This framing hammer has a torsion controlled grip. It is curved in such a way that it reduces the load on your wrists when you swing it and during impact. The grip is also coated in material designed to reduce vibrations to a minimum. So if you have arthritis or other wrist issues this is the perfect choice for you.

Despite the curved design this hammer is actually very well balanced, resulting in a very pleasurable experience to use this hand tool. The head on this hammer is a magnet so it helps to hold nails in place so you can get them in using just one hand and reduce the chance of accidentally hitting your finger. Another advantage of the magnetized head is the ability to pick up dropped nails quickly and easily. Overall this is a great pick, and number two on our list for good reason. However the only downside that we see is that it is a little pricey. 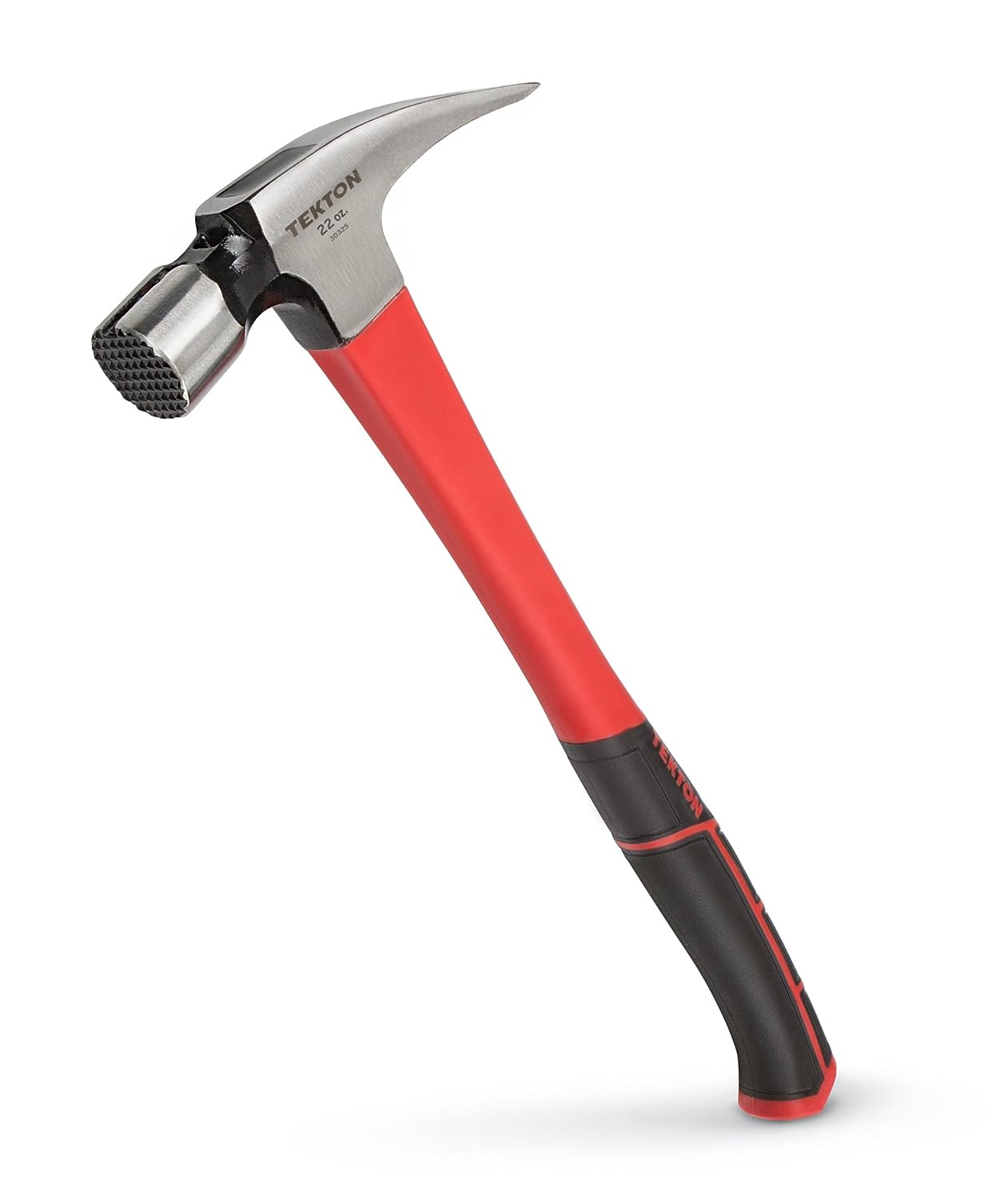 This framing hammer from TEKTON is another hammer on our list that ticks all the boxes that are needed to make it a good choice for the money. One quite unique feature that this hammer has is a magnetic slot which runs directly down the top of the head. This feature is ideal, and makes it easy to nail with only one hand being used. Unlike the stanley this uses a slot, so you can’t drop the nail. Plus it’s a good way to protect the fingers of your hand which would otherwise be holding onto the nail. The claw on this hammer is great for removing nails, even in tight angles. The face of this hammers head is textured like the Estwing model.

All these great features and this framing hammer doesn’t cost too much. In fact the price is so reasonable it makes it our number one pick for “best value”. The only downside this hammer has is that it is potentially less durable than others on this list. The body of the hammer is fiberglass, while the head is steel. So the connection between the head and body won’t be as strong as one of the models that is forged of one piece of steel. 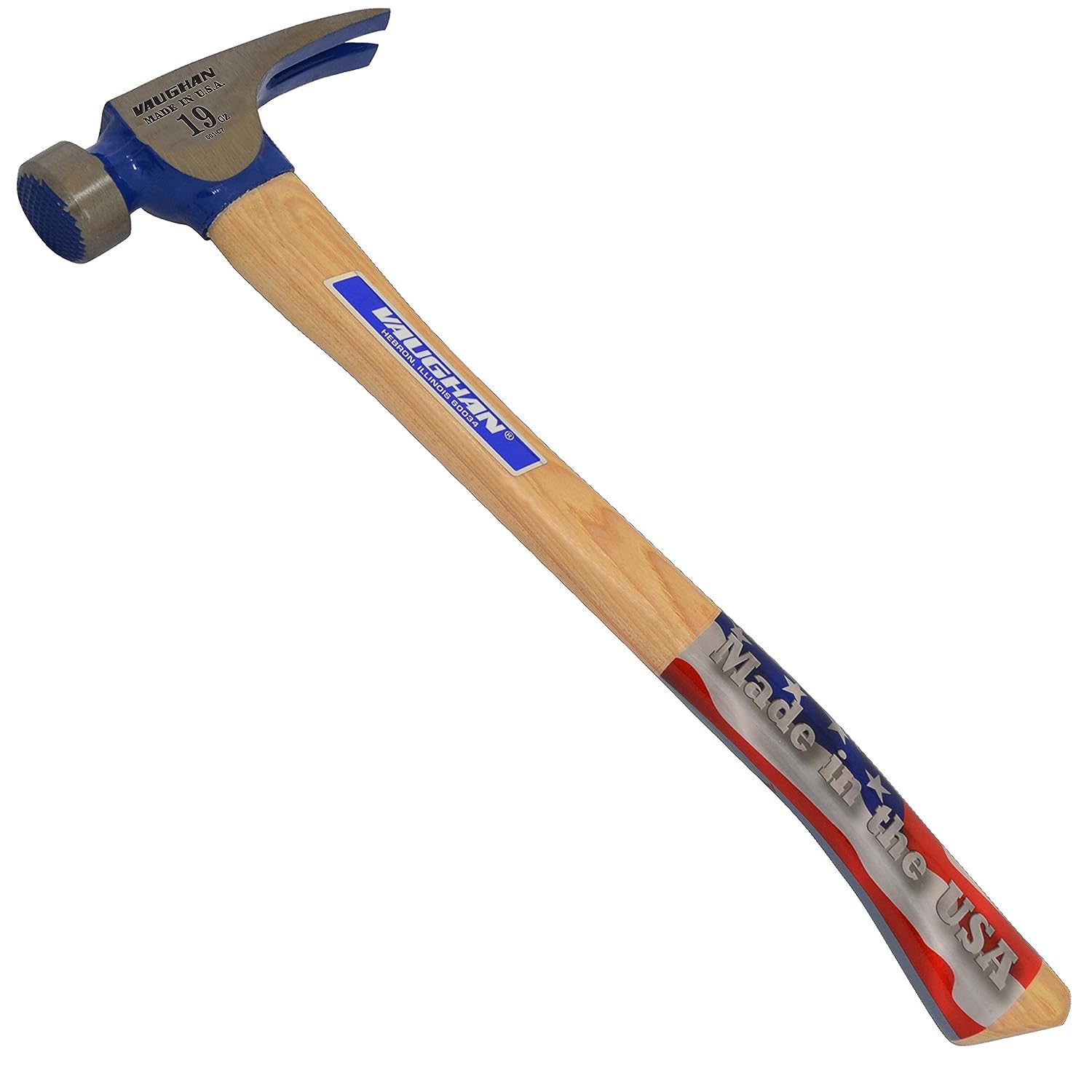 The Vaughan & Bushnell CF2HC Framing Hammer is another great option. It weighs in at 19 ounces and comes with a textured face for increased grip. This hammer is also larger than most, so the part that you strike with is considerably bigger than usual which makes it easier to hit nails. The CF2HC features a claw which is excellent at removing nails from wood.

The handle of this hammer is wooden, specifically hickory – which gives it a certain old fashioned look. But the drawback of the handle being made from wood is that it won’t be as strong as other hammers. Especially when compared against a hammer that is made from one piece of forged steel. The CF2HC features a slot for starting a nail with only one hand, but unfortunately it is not a magnet. All up, this is a decent option at an okay price. 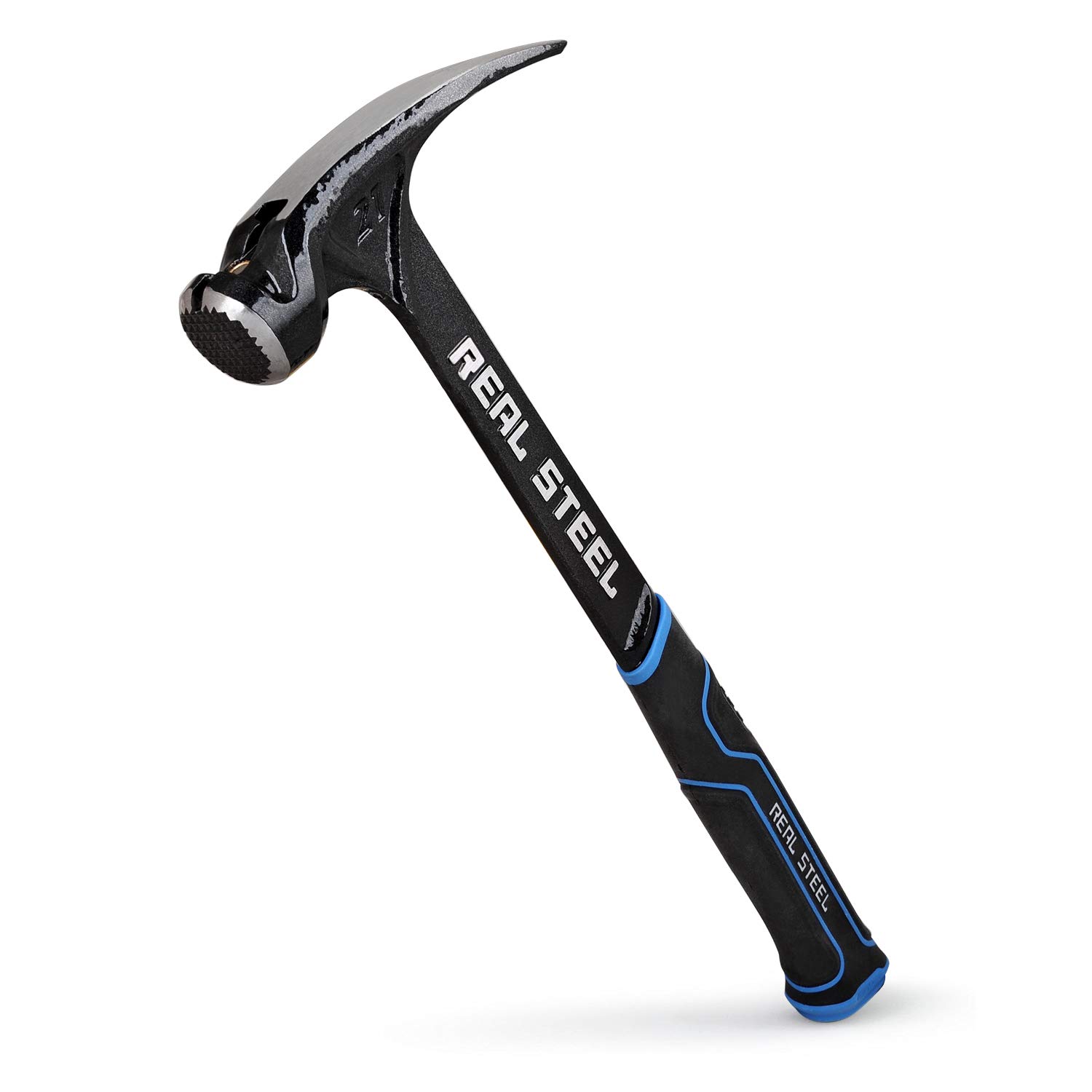 The Real Steel 0517 Ultra Framing Hammer is another decent option. It has some nice features, that the other hammers on this list also have. Such as a textured face for increased grip. However the face is quite a bit smaller than the faces of other hammers on this list. Like the Stanley hammer this one has a magnetic nail slot to start the job with just one hand. This is an immensely useful feature, and we wouldn’t recommend getting a framing hammer that doesn’t have this feature. As far as weight goes, this hammer is on the lighter side of things and weighs less than the others on our list. The lighter weight means that this hammer is easier to use on your arms, shoulders, and wrists, so keep that in mind.

Unfortunately the lighter weight does come with a downside. By weighing less this hammer is not as good at driving nails in as other heavier models are. Also the grip on the 0517 Ultra is less ideal than other options on our list but it is still very usable. With all this considered this options comes in at number 5, and while it’s not our best pick it is still a decent option.

Hopefully after reading through the above reviews you’ve decided on a good framing hammer that ticks all the boxes, and meets your requirements. If you’re still unsure of which one is best for you then read this buyer’s guide. This buyer’s guide is designed to remove the guessing work out of your decision.

The face on a hammer is probably the most crucial part to be aware of. It’s the part of the head of the hammer which makes contact with the nail. Not everyone realizes this but there are many different types of faces available on framing hammers. As far as using your hammer for framing goes, you will want a face which is texture/milled with a cross cut waffle style pattern. This pattern on the face increased the grip so that you get a good hit on the nail every time.

If the face of the hammer is smooth it is more prone to slipping, which is tiresome as well as potentially dangerous to do. Because a textured face is less likely to suffer from slippage it is a far more effective design for these tools. The only upside of a smooth surface face over a textured one is that it doesn’t leave bad marks if you accidentally hit the frame.

The handle is very crucial in regards to what makes a hammer good. If the handle of your framing hammer is weak then it will be much more prone to breakage. The strength of the hammer and handle is determined both by the tang, and what the handle is made of. Full tang hammers are the strongest as these are cast from one single piece of metal so there is no weak point, although this design is not the most common. Wooden handles are also very common, and they are great at absorbing impact shock to help ease the load on your arms. But the downside is that framing hammers which are made from wood are probably the weakest and most prone to cracks.

Fiberglass handles are good at absorbing shock like wood, but less prone to cracking, so these are a nice middle ground between steel and wood. Steel is clearly the most strong material for the hammer to be made from, especially if it is full tang. But the downside of steel is that it does transfer more of the shock into the arm of the person holding the hammer. This can be mitigated with a good rubber handle attached to the outside portion of the hammer.

The Estwing framing hammer is clearly the best option on this list, due to a variety of great features that it has. However it’s not cheap. If value for money is your primary concern then perhaps the stanley 51-167 is a better balanced option providing good features at an affordable price. Hopefully after reading through our reviews and buyer’s guide you have all you need to know to pick the right model for your needs.